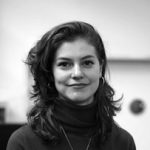 Contemporary dance can be presented anywhere: from museums to former factories, from white-wall gallery spaces to graffiti-adorned street corners. Choreographers are also, as well as forging new stages, increasingly inviting audiences to immerse themselves in durational performative installations or take part in one-on-one encounters or interventions. Along with this variety of spaces and formats have come new methods of programming. At this nexus sits Berlin’s Montag Modus, an event series that presents mixed, multimedia performances across multi-storey buildings.

Szirmay-Kalos spoke to Springback about working outside the theatre context, the term ‘performance exhibition’ and about plans to bring Montag Modus to Prague and London.

BJ: At Montag Modus you invite dance artists to show a work-in-progress or adapt an existing piece. How does this work?

LSz-K: Usually I approach artists whose work suits the theme of the event. We talk about the programme and the site and how their piece could fit within it – most artists find it an interesting challenge! They are then invited for a one-week mini-residency on site where they adapt their piece to the space. As we don’t have the technical capacities of a fully equipped theatre, we are, rather than ‘simplifying’ the works, more interested in re-thinking them in the frame of Montag Modus. This means that with a stage piece, artists might take a notion or a single scene from the work and expand on that. This is what the Hungarian trio Ábris Gryllus, Márton Emil Tóth and Tamara Zsófia Vadas did with their project ‘NIBIRU’: they used their research, which addressed the Anthropocene from the viewpoint of teenage girls, to create a performative installation. The starting point for this ‘environment’ was the same as it was for the original piece, but it became an entirely different work in the process. Other pieces already work well in the space and barely require adaptation or cutting, such as Dragana Bulut’s solo Pass it on, which we presented in its full-length version. Once we know the formats of the night, we, as curators, come up with a schedule and discuss this with the artists – each event is essentially a co-creation of many.

BJ: What do you pay attention to when you create the programme?

LSz-K: We aim to offer our audience different bodily invitations throughout the night. Rather than staying put, like in the traditional theatre experience, our audience is mobile, as they move between rooms and spaces to visit the performances that overlap or happen simultaneously as they occupy the whole building. Overall, the structure is loose – people are welcome to come in later or leave earlier, and as an audience member you are not necessarily obliged to watch the pieces. This creates a kind of dramaturgy, or multiple dramaturgies of the evening, as audiences get to choose their own route.

BJ: To what extent do you direct this ‘route’?

LSz-K: It depends. We have had evenings where we had a tight schedule, and we had to move the audience swiftly from one space to another, which created a real sense of collective experience. And then there are other events where the audience is hardly ever all gathered in the same room, leading to a more individual experience. Sometimes a piece might have limited spots, meaning that from the outset, it is not possible for everyone to see it. We are always interested in confronting our audience with the fact that they can never see everything – they have to make a choice and accept their decisions.

BJ: So what kind of role does the audience take?

LSz-K: Montag Modus has the energy of an exhibition opening or a première, but it demands a different kind of focus from the audience and the liberal structure results in many in-between moments – between performances, between spaces – where people can talk. It’s a very social event! Also, the works themselves very often invite encounters or create relations among audience members, like in the case of environments or installations: when the audience enters, they become part of the piece.

And interesting relations emerge when people are made to move. For example, for the topic of the Anthropocene, cultural scholar Martina Ruhsam wrote a text which we printed on a 20m roll of paper and installed on the staircase. It was very interesting how it activated the audience: to read the poem they had to go backwards down the stairs and try not to bump into one another. This intertwining of art and social life, overlapping on a high energy level, is a core part of Montag Modus.

BJ: Was the text commissioned for the event?

LSz-K: Yes. With this year’s Klimata series, we were interested in inviting a writer or a cultural scholar to contribute to the topic for each event. Most of the texts became very poetic and we thought about how they could be ‘performed’ in line with the theme. For example the text ‘Digital Eschatology’, on the topic of digital climate by philosopher Márió Z. Nemes, was sent to the audience via email. 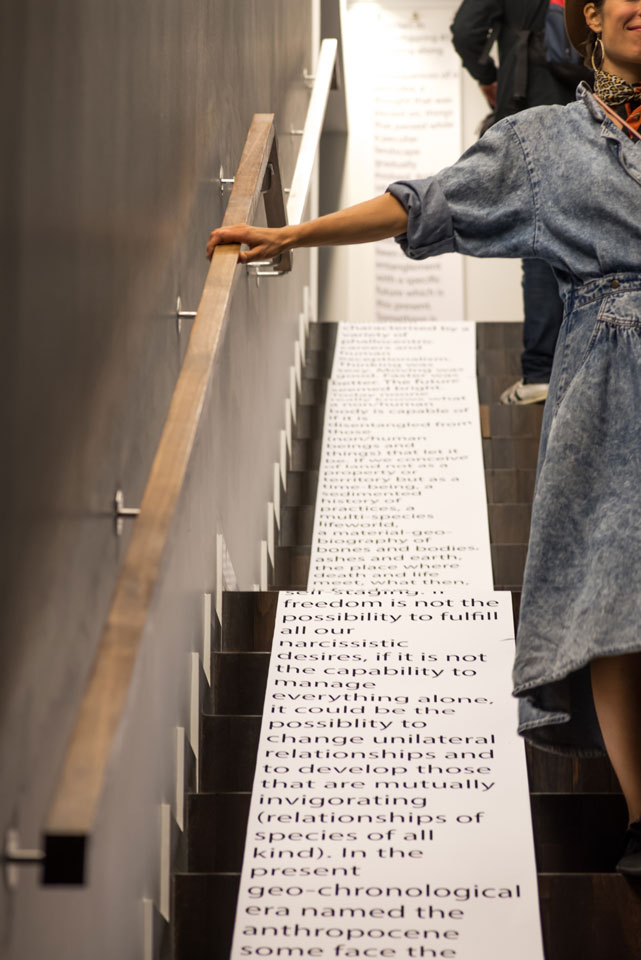 BJ: How would you define the format you are working in?

LSz-K: It’s a work-in-progress term, but we use ‘performance exhibition’. ‘Performance’ because we are programming live art, ‘exhibition’ because the audience has the freedom to move around, like they would in an art gallery. But using terms from the visual arts is not unproblematic: as with ‘live art’, they take on a different meaning. The same counts for the understanding of roles. With time-based works the role of the curator includes another layer of direction, namely what happens when. My decisions have an impact on the presentation of the works and therefore in some way on how they are perceived. I am often conflicted about this, and find myself asking in what way are my decisions acceptable in terms of authorship.

In what way can an interdisciplinary project be presented in locations that are created for disciplinary works?

BJ: How do institutions respond to the ‘performance exhibition’ format?

LSz-K: Well, the main question here, is in what way can an interdisciplinary project be presented in locations that are created for disciplinary works? Take the museum: the layout, the air-conditioning, everything in the space is created to preserve art works. What happens when you place a body there? I’m interested in playing with these questions and finding institutions that have the possibilities, both on an infrastructural and on a spatial level, to allow these kind of experimentations to happen. There are some – like the Tate in London and the Walker centre in the States – that have a department for the visual arts and for the performing arts, and are researching how these disciplines can not just co-exist but enter into dialogue with one another. A lot depends on the context in which they are presented. Take Anne Imhof’s works. She comes from a visual arts backgrounds and says she creates images, but from a dance perspective it is a site-specific piece. As it is presented in a visual arts context it is perceived through a different lens.

BJ: Are these disciplinary lenses also reflected in funding mechanisms?

LSz-K: Unfortunately the funding structure – and not just in Berlin – is very discipline-oriented. We are very lucky to be supported by the Berlin Senat and the Hauptstadtkulturfonds (which is also why our events are free!) with their Spartenoffene (‘discipline-open’) funding programme. But even then we were required to apply from a given discipline. Within the existing categories of visual arts and contemporary dance, I am interested in asking the question: what is theatricality in both of these worlds? I feel that many things are very similar but they exist in parallel to one another because of the divisions between the scenes. But rather than creating events for only one of these scenes, I am interested in finding ways that their audiences can overlap.

BJ: What do you have planned for the future?

LSz-K: Stemming from the format, the Fear Of Missing Out is next year’s topic. We will be looking into attention, commitment and distraction. Can distraction, especially from authority, be a form of emancipation? And as a way to invite new influences into the curation of Montag Modus, the curatorial team, featuring academics and artists, will be different for each event. It’s important to consistently unlearn what I have learnt! In 2020, we will be heading to the gigantic space of Divadlo X10 in Prague in July, and there are also plans to come to London… ● 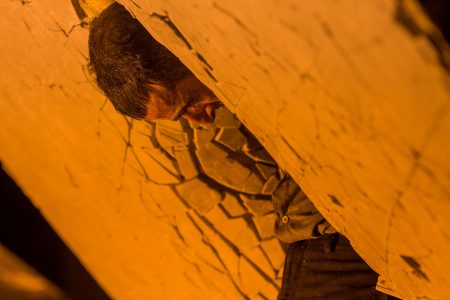 A stage in the gallery: Dimitris Papaioannou’s Sisyphus/Trans/Form

The Continuous Network: capillary action of dance into galleries 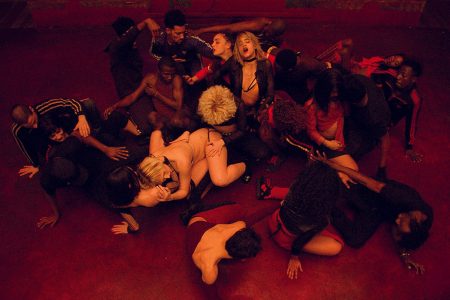