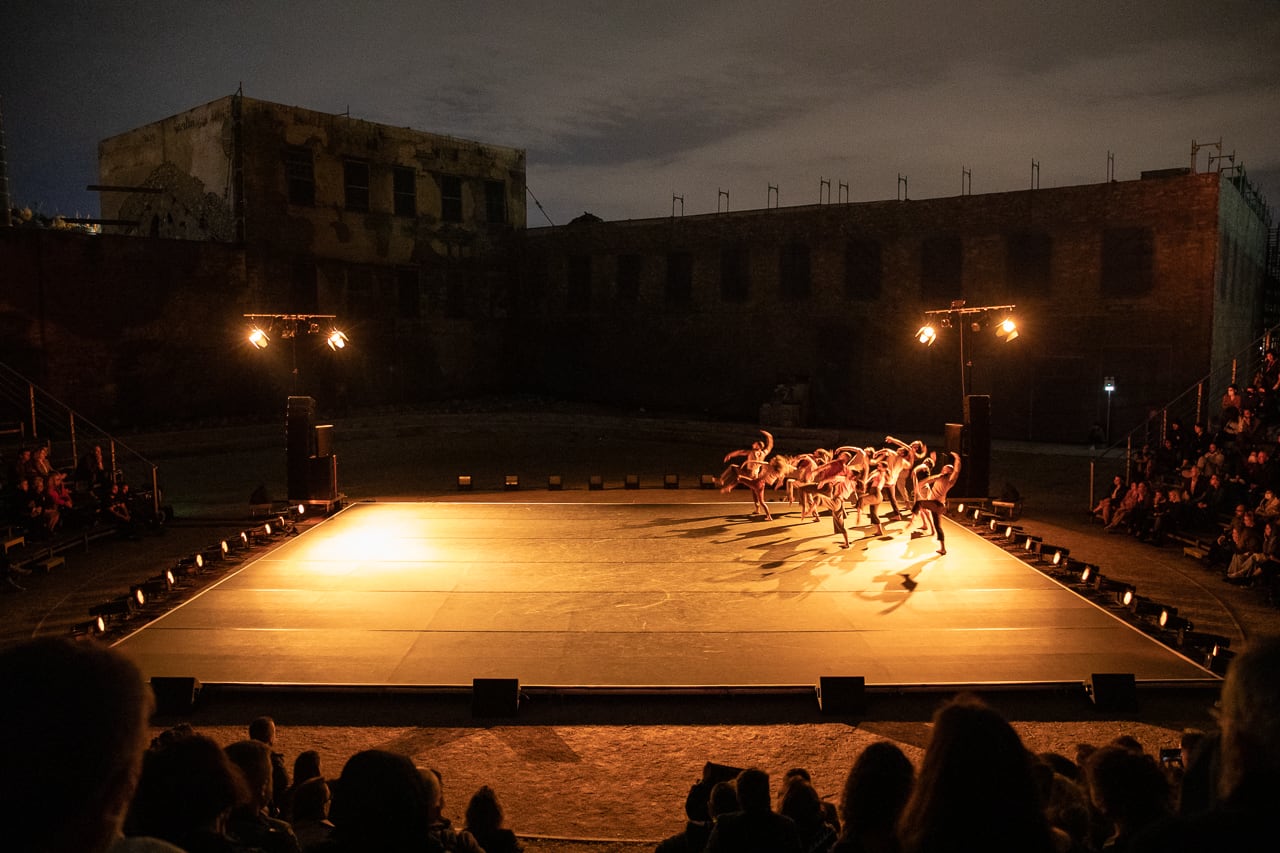 Deep Expectations, or The Pleasure Is All Mine

‘ENJOY THE SHOW.’These three little words of well-wishing were what attendees at Spring Forward 2022 heard just before the start of nearly every indoor performance, initially in Greek and then English. In me the repetition of this recorded message bred not contempt but rather an amused and, the more I heard it, growing curiosity.

What does enjoying a show mean? Thanks to the friendly automatic reminder I was often conscious about sitting upright and alert, ready to receive whatever was about to unfold with an open mind and in an air of anticipation. Might this be ‘the one’ Aerowaves performance to crack my heart apart, shift my perspective, tickle my fancy or arouse my ardour, bring me solace and expand my understanding of what it means to be alive?

But hang on. Aren’t these responses too much to ask or desire of a single show? Isn’t it unfair to load such expectations upon myself, let alone the artists? More to the point, in Elefsina did I actually enjoy (aka connect with) this or that performance with anything like this multiplicity of sensations?

The answer is a qualified yes. I certainly had pleasurable and potentially memorable experiences. Among them were Jacopo Jenna’s Some Choreographies, in which one brave, expressive body functioned like a living footnote to a huge, ever-changing screen flooded with decades of globally-sourced, dance-based footage; Soirée d’études, Cassiel Gaube’s absorbing, stripped-back examination of house dance rhythms; the tiny but titanic Coutney May Robinson in her galvanising solo the pleasure of stepping off a horse when it’s moving at full speed; and the gripping and, depending upon one’s proximity to the performers, intimate endurance test that is Anna-Marija Adomaiyte’s Pas de deux.

So yes, I enjoyed these and other works to varying degrees and in various ways. Hearing that recording over and over, however, triggered thoughts about reciprocity. Can a show ever enjoy the audience? But really, I want to take these musings further. It might seem egotistical to enquire, but did any of the Spring Forward performances specifically enjoy me? Each would’ve carried on whether or not I was temporarily in its orbit, functioning as a (not only professional) witness. Did my being in the room or, if a show was staged outdoors, within eyesight and earshot of it make any difference at all?

Putting it bluntly, did (and does) my existence matter?

I’ll leave that question open and end with three ‘case studies’ – two upbeat, the other very much thumbs down.

Presented the night before Spring Forward 2022 began, Dance MyS+eries was an interactive and peripatetic performance event showcasing the work of 14 emerging artists from the newly-opened Academy of Dance U(R)TOPIAS. Lasting approximately three hours, this collage-like show about Elefsina’s past and present catered to just 45 or so invited guests. As one of them I felt welcomed, appreciated and informed. What’s more, we privileged people were each fed, watered and gifted with a goodie bag of items relating directly to the evening‘s entertainment.

Spring Forward’s closing night performance was likewise a treat. Cued to a brilliant (recorded) expansion of Ravel’s famous score, Jesús Rubio Gamo’s sustained, dramatic and extraordinarily visceral Gran Bolero was staged in an open-air amphitheatre adjacent to Elefsina’s port. It was also open to locals – real people, not industry insiders. Lasting about fifty minutes, this thoughtful, exhilarating and very communal work was by turns dark, mournful, possibly political but also joyous, ecstatic and, as it escalated both musically and kinetically, always grounded in the bodies of twelve indefatigable dancers.

Earlier in the day I’d remarked to a colleague that while the 2022 Aeroewaves programme had yielded its share of disappointments, I’d yet to find a show I loathed. And then along came Gergő D. Farkas’ Deep Fake. Stagnating in pretentious ironies about authenticity, and (confidently, it has to be said) performed in a deliberately alienating camp style, this tediously, arrogantly self-indulgent solo was the nadir of my dance marathon in Elefsina. Unwittingly, thirty or so seconds before the damn thing ended, having been plunged into darkness and assailed by an intolerably loud soundtrack, I walked out – a symbolic gesture of liberation from a show I seriously suspect might’ve enjoyed torturing me.