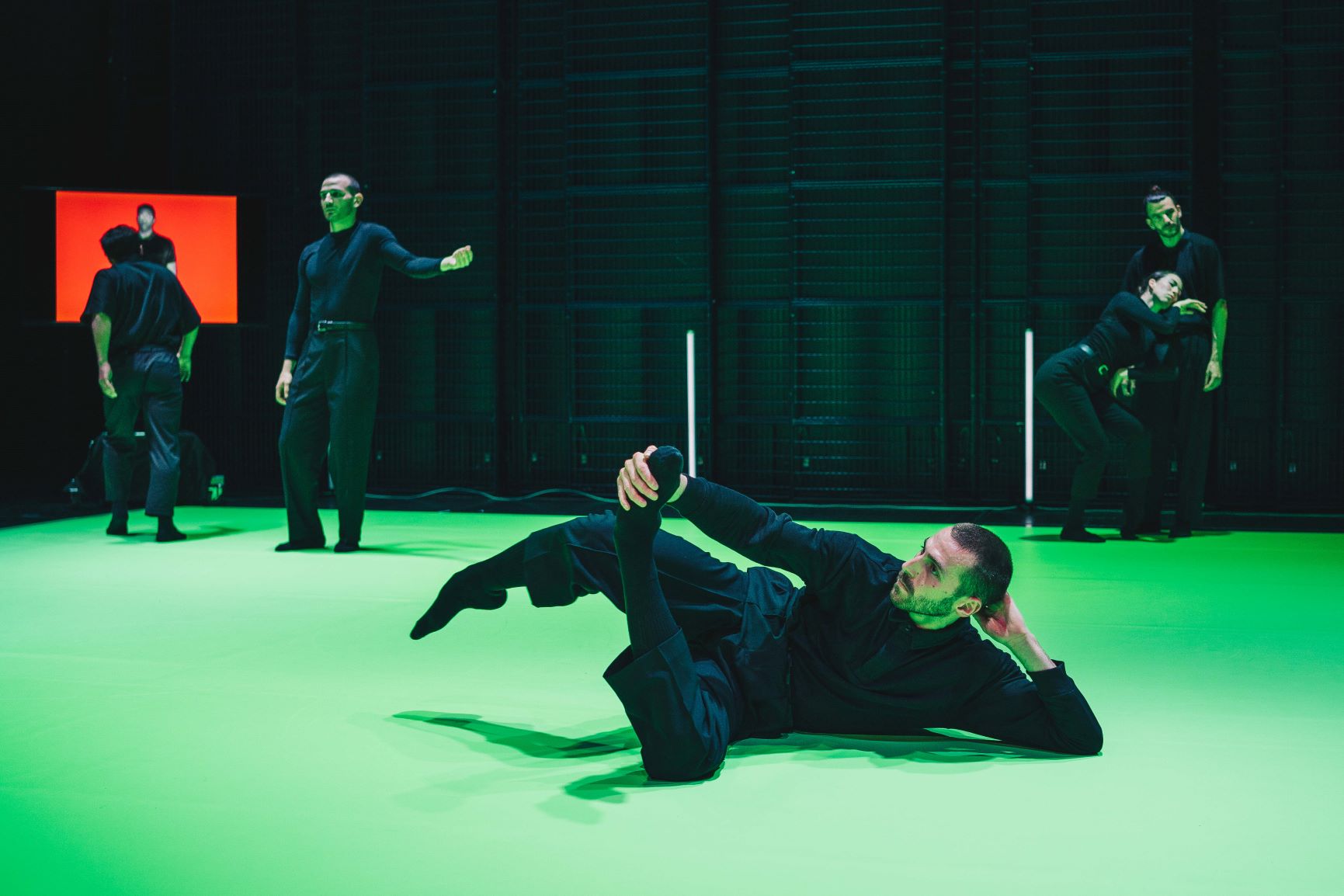 Although it doesn’t feel like it, this agreeably shallow international (Germany, Italy, UK) dance/music collaboration between choreographer Diego Tortelli, dramaturg Miria Wurm and team was mainly created online. Their inspiration: seminal public art sculpture project realised via satellite feed from New York and Los Angeles in 1980. The stage is framed by two largeish video screens plus an arc of ten vertical light bars. Occupying this reasonably retro-stylish arena is a black-clad, sexily smiling cast of six (including one woman who overplays the curvaceously feminine card). They dance with cool, flashy yet at times somewhat machinated aplomb, evincing a pleasantly energetic rapport.

Drummer-composer Federico Bigonzetti’s big, rumbling, jazz-infected beats and washes of static support their fashionably streetish moves. Presumably he’s the steady presence on one screen. The other alternates between a young man peering curiously out of the frame, or busily pedestrianised urban scenes. The visuals are bland but acceptable. The work as a whole lasts a trim twenty minutes. And if, to borrow a word that passes by onscreen, I didn’t really CONNECT with it, I suspect those involved onstage and off would happily carry on regardless.

With their shiny belt buckles and pomaded hair, the six black-clothed dancers in HOLE IN SPACE could be hosts at an elitist club. This lends a touch of irony to their ‘aren’t we fabulous?’ smirks. Their dancing has the sensuality of a Bob Fosse-number, the high leg-fetish of NDT and the stringency of Sharon Eyal’s tippy-toeing mini-marches. In compelling duets and trios, their limbs needle and stitch through each other in awkward yet elegant embraces.

It is all flawlessly executed in its finesse, and now and then even borrows from urban clubbing styles. But although well crafted, the choreography stays too uninterruptedly familiar. And the back layer of the performance, inspired by artist duo Kit Galloway and Sherrie Rabinowitz’s tele-installation from the 1980s, remains just that – a background. The online performer and drummer in the two upstage TVs framing the action are like aquarium goldfish at some posh restaurant, peeking out but going nowhere. I rest my gaze.

There is a certain club aesthetic to the setting of HOLE IN SPACE, only its loudness is not in the sound. The pulsating lights surrounding the dancers, and the video footage projected on two upstage screens contributes to this feeling; the changing and flashy colours, or the silent and anonymous drummer, are like a muted music channel on a TV behind some bar.

If you look at the screens long enough, you start to grasp what is going on here. We are being presented with an intertwining of separate and, to a large degree, autonomous channels of information. One of them is formed by the six dancers (five men and one woman) who dance solos and duets downstage while the rest move independently upstage and at times unite as an ensemble. We’re free to direct and play with our own gaze and attention, deciding what to focus on. Should it be the performers or the dynamic music, the screens? But is co-existing onstage the same thing as truly coming together?